The Carolina Hurricanes are my favorite hockey team. They are really the ONLY hockey team I even watch and keep up with. For years, hockey in Raleigh, N.C. had been less than stellar in terms of success on the ice.

With a new owner in Tom Dundon, a new coach in Rod Brind’Amour, new general manager Don Waddell and a new captain Justin Williams; I was optimistic about this season. The leadership and management had changed, but the culture had become one of a losing franchise.

The season was sort of up and down … until something special started happening.

Believe it or not, it might have been started with some critical comments from Don Cherry, the opinionated, loud-dressing Canadian Hockey Night commentator. Cherry, a former player and coach, didn’t like the Hurricanes’ “Storm Surge” celebrations, which became a post-game ritual after home wins.

It starts with a unified Viking skol clap which then leads to a new scene acted out by the Hurricanes players. These celebrations have included about anything you can think of with hockey sticks, pucks, gloves, etc. They paid tribute to ACC basketball, Duck Duck Goose, bowling and even limbo as the wins piled up.

After missing the playoffs for nine straight seasons, the Hurricanes came alive in January and went on a pretty special run, reaching the playoffs. They reached the Eastern Conference finals, but got swept by a Boston team that wound up losing the Stanley Cup to St. Louis in a seven-game series. Carolina won 31 of its last 45 games of the season, the second most in NHL wins behind only Tampa Bay.

After losing for so many seasons, the team was about to bring about a culture shift on the ice and in the stands. The fans loved it even if Cherry hated it. It was marketing gold that fell in Carolina’s lap. It came at a time when the number of empty seats in PNC Arena was getting more and more noticeable.

Raleigh isn’t the biggest NHL market. A lack of winning didn’t help either. Something big had to get fans involved and excited about hockey again.

It came in the form of the Storm Surge.

What originally started as the team jumping into the boards together turned into one of the biggest post-win spectacles in the NHL. While most people love it as a show of emotion and a celebration with the city they play in, Cherry didn’t like it.

If Cherry didn’t start this movement, he definitely poured gasoline on an existing fire.

What did he say?

Cherry called them a “bunch of jerks” on a Coach’s Corner segment on Hockey Night in Canada. He said the Storm Surge had no place in hockey.

A few days later, “bunch of jerks” shirts were made available for purchase. It led to viral videos and thousands of posts on social media. The Hurricanes took a celebration and made it bigger and better. It galvanized an entire fan base and brought out new fans to home games. They sold shirts to people in almost all 50 states and in 11 countries during the playoffs.

I don’t remember seeing anything like this in the NHL, not that I’ve followed it closely outside of the Hurricanes. It did prove, however, that one moment can catapult you to being better or even great. A silly celebration was enough motivation to play harder and win more games so the celebrations could take place.

Cherry indirectly started this movement for an infamously low-profile franchise in a small market to collect the brand they’ve been looking for on a national scale. Now that people are interested in the Hurricanes, they’ve come to realize that they aren’t too bad at hockey either.

Would this team have made the playoffs without Cherry’s comments? Maybe. But, I don’t think that would have made such a deep run if they hadn’t gained such great momentum via the surges as the regular season wound down.

Fans knew to stay until the end of the game so they could see these silly celebrations. They even got boxing great Evander Holyfield to participate in a surge after a win in Raleigh. At most Hurricanes’ games, fans head to the exit early because of the product on the ice. That changed this season.

The players loved coming up with the celebrations too. It created a bond for fans with the team too. My son, Spencer bought one of the shirts. They used the phrase in about every way you can think of. It became the team’s identity.

I even took pictures with my wife, Jane in Budapest and Paris with a towel we got at a home game that 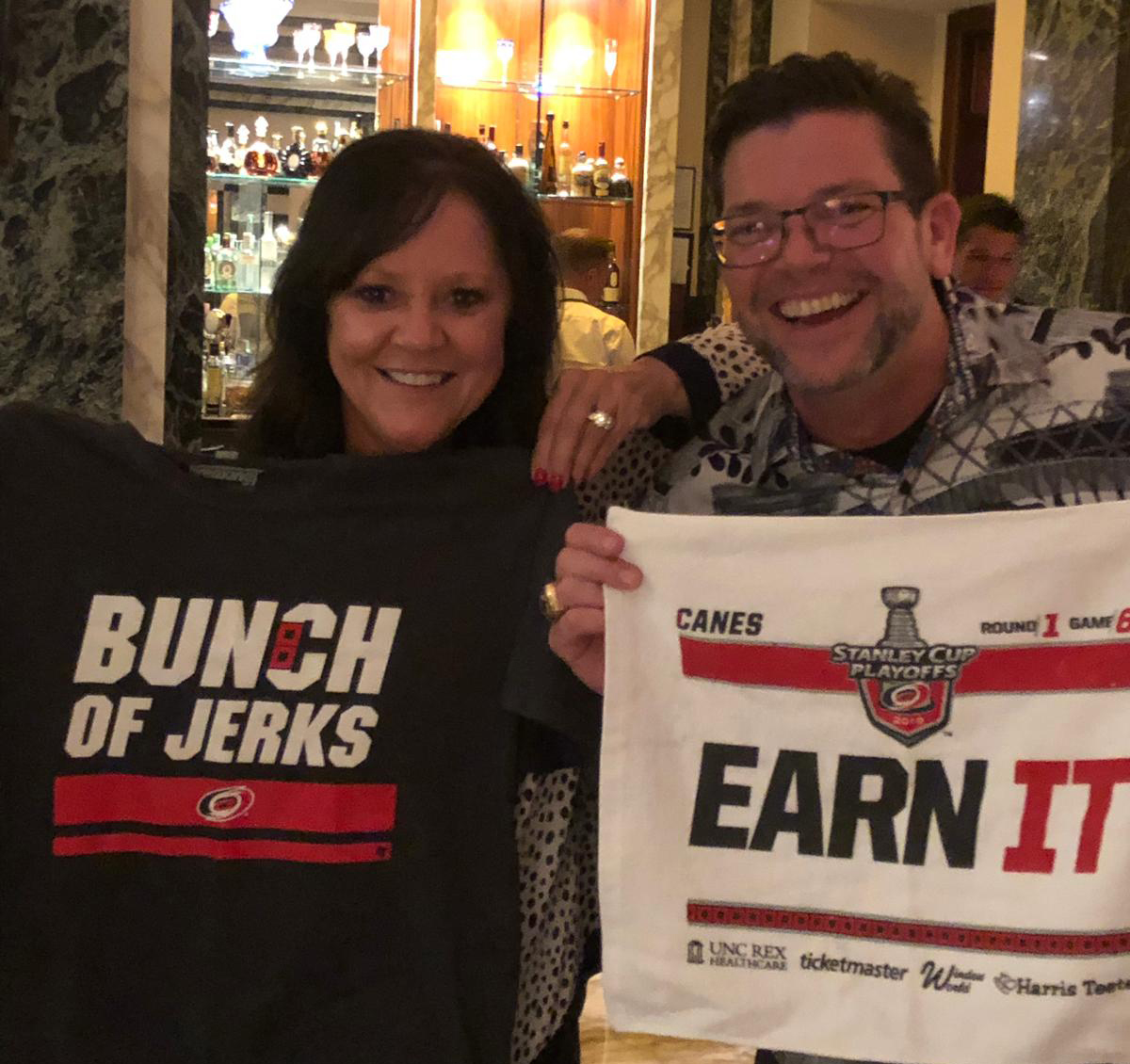 had the phrase on it. I didn’t want to miss out on the fun!

Will the Storm Surge come back next season? Who knows? What is clear is that a simple comment – good or bad – can spark a person or group to perform at a higher level. It can motivate change in attitude or culture. It can be a difference maker.

Cherry didn’t realize his comments ignited a movement that had sort of started already. When he was critical of the team, they channeled their displeasure with his comments into their on-ice play, and started winning. The entire team embraced this movement, actively participated and made it even bigger. That’s what it takes for a movement to happen.

The other lesson in Cherry’s comments is that you don’t know how people will respond to what you say. Words are more powerful than we realize. We can use our words for good and bad. We can use them to build or breakdown. We can use them for kindness or to be downright mean. We can encourage or discourage with our tongue.

Not all people will take criticism and turn it into a positive like the Hurricanes. Please be careful of what you say to people because you can hurt others. If you aren’t sure about what you are about to say, take a second and think before you speak. We all need encouragement and positive words are a great way to inspire and cheer another person to do more than they ever thought possible.