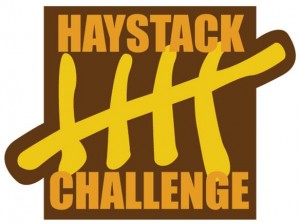 If you’ve listened to a conference call or The Wednesday Call recently, then you’ve certainly heard me talking about the Haystack Challenge.

Why is something so simple so important to your success with The Alliance? The simple act of making dials to earn those haystacks will determine what your income will be this year and in years to come.

In 1837, Ralph Waldo Emerson wrote: “It is very hard to be simple enough to be good.”

Mr. Emerson probably had no idea that his words still remain true to this day. If you can do the mundane act of pressing the numbers in your phone, wait for people to answer and then talk to them, you will see it pay off almost immediately.

How do I complete the Haystack Challenge? There are a couple of rules, but it’s about as simple as anything I’ve ever rolled out. You get a mark for dialing or calling leads, recruits and your downline. Leaving a voice mail does count. You DON’T get a mark for calling your upline, your crossline, your drinking buddy from high school or any relative that doesn’t understand what you do.

NOTE: You can’t have other people dialing for you either. I’ve had people ask about letting staff make dials for this game. This is a challenge for YOU … not them. Now, you can encourage them to play the game too. YOU make the dials! They make the dials. The Challenge is for everyone!

Now, the fifth time you make a dial you get to do a cross mark that gives you your first haystack. It’s really about making a series of sets of five calls at a time. When you start tracking this, you want to make a series of 10 haystacks across a sheet of paper. That’s 50 calls.

After that, I want you to drop down and make a series of nine haystacks. That’s 45 calls.

Seven haystacks. Six haystacks. Do it until you get done with that final haystack. You’ve just made 275 phone calls in that given week! You’ve also just successfully completed the Haystack Challenge for the week.

Do YOU think you can make 275 phone calls this week? I believe that YOU can!

This challenge is very simple. However, you have to make the effort to complete it every week. There will be times when you don’t want to make one more call and you are going to have to remind yourself that you can’t start a haystack and not get it complete. That’s an easy tip to make you keep pushing yourself. We say, “Don’t leave a Haystack hanging!” Make one call, then make enough for a complete Haystack.

Here’s another tip: Figure out what you are going to give up in order to make more haystacks. I’ve heard of people not watching sports as much. Maybe you stop watching your favorite show. The key is to make the time to complete the haystack challenge every single week, and let the less important stuff NOT get done.

Make that your goal today! This week you can do it. Just keep making haystacks!