My biggest wish when I tell people to do something is … that they DO it fully. I’m not talking about only new people and not just licensed people … everybody.

It’s not just one or two people, tell everybody that there is a buffet, and all are welcomed to fill up a plate. Don’t just squirrel away the information. You get your people on and YOU make sure they are doing the same. It’s not just you doing it, it is the team doing it. The numbers explode when people do this.

When everybody starts running the play, then you amplify all our efforts and we all do more than if we are just trying to move the world on our own. 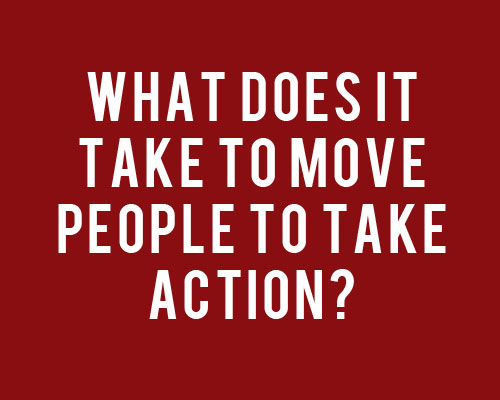 This is one of the basic things that can separate just being average from being great at what you do. Can you work at communicating a message to the point where it’s not only received and processed, but the people hearing it then know to get others to do the same? When this trickle down or snowball concept takes hold then you start seeing “big things” happen for you and the people around you.

What does it take to move people to take action?

What does it take to have impact when you communicate?

How can I get my great ideas implemented?

To lead an effective team you have to get everyone moving and eventually in the same direction. But left to their own accord, people will naturally do it their way, go it alone or – YIKES – do nothing!

Many entrepreneurs think that a good idea or great compensation is enough to get the people moving and that’s not exactly true. When you get them making money and operating at their optimum level then they are more likely to buy into what the team is working toward.

Is it easy? Heck no! Is it worth it when it starts happening? Absolutely. YES!

It takes hard work and constant communication. The simple way is to go to each person and talk to them to make sure they know the why and how of the goal. It also takes inspiring people or they probably won’t move. The problem with talking to everyone is that it takes forever and it is rarely scalable. That is why duplication is critical.

To be efficient at this process, you must learn to use communication tools across the board. Writing, talking, video, etc. Do it with high-powered emotion to the masses at one time. The hard part is to convince people to do it. When you communicate correctly to people it will work.

The most important thing a leader can do is to make sure his team knows the goal – be it big or small.

Get everybody contributing. Overcoming challenges could be as simple as making sure each person on the team has a task to work on. Create a place where you allow people to have physical, emotional and social well-being. Books, audios and the right association with people helps this!

Be exciting. People like being in exciting environments. They have more fun and are more engaged in what they are doing. Recognize successes. Core things matter like fear. Help them overcome it!

Have faith in people and teach them to act out of faith and not fear. Make sure you are giving them hope for a better tomorrow than today.