Each July since 1993, ESPN has held its ESPY awards, which is similar to Grammys in music and Emmys in television. The inaugural telecast was on March 3, 1993 and is remembered for a speech given by Jimmy Valvano, who coached my NC State Wolfpack to a national basketball title in 1983.

On that night, he was awarded with the Arthur Ashe Courage Award and proceeds from sales of tickets to the event were earmarked to go to the V Foundation, a charity established to help cancer research in Valvano’s honor. Only 55 days later, Valvano passed away from cancer.

Many of you have seen Valvano’s famous speech today, or certainly have seen it in the last 25 years as it is often played leading up to the ESPYs. “Don’t ever give up … Don’t ever give up.” That’s the most famous line from his speech and it is something I hope you take to heart. You can get what you want if you don’t give up and keep working for your goal.

There a section in my new book, “Inside The Circle” that talks about Valvano and the impact he made at NC State. I’d like to share that portion of the book with you now as a free preview of some of what my new books has in it! I hope you enjoy it.

“Every single day, in every walk of life, ordinary people do extraordinary things.” 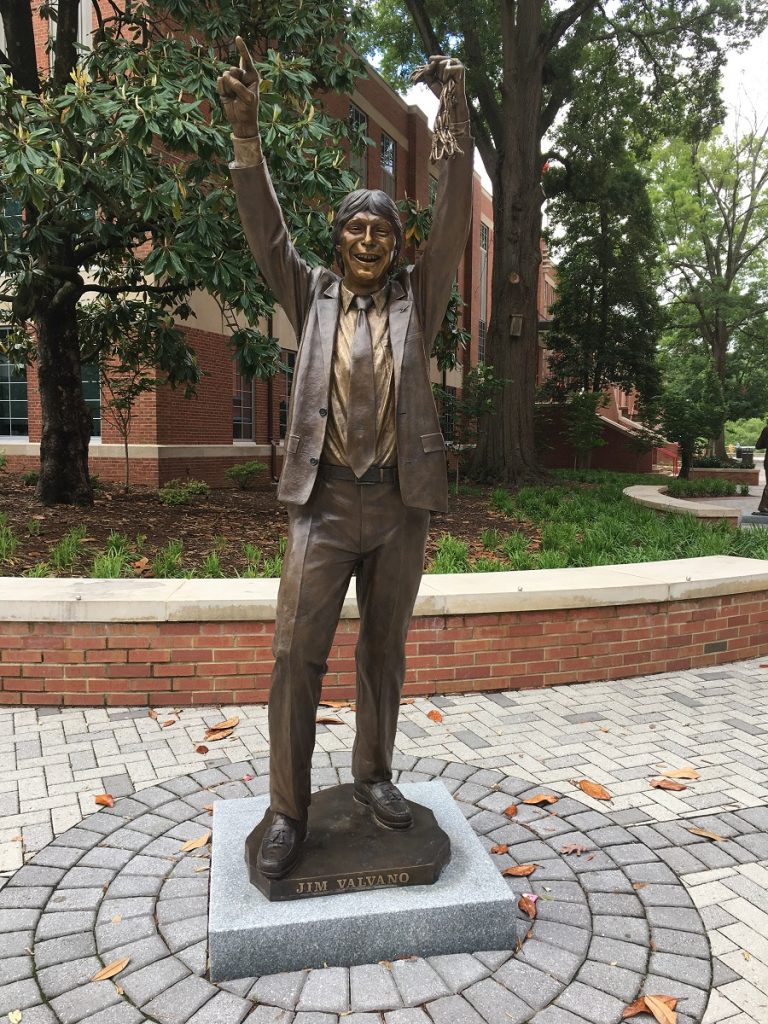 A coach with a dream

There’s a great documentary on the 1983 N.C. State Wolfpack basketball team that chronicles the journey of Coach Jim Valvano, the highly entertaining character that we all know now as Jimmy V. The Jimmy V Foundation, founded just prior to Valvano passing away at age 47 from cancer on April 28, 1993, has raised more than $173 million to fund cancer research across the United States.

Valvano’s team won the NCAA title in the end, but the journey and the road they had to go down during that magical season is the real story. I was a freshman at N.C. State that season and Valvano is one of my heroes because of the way he lived his life.

I remember that to even make the NCAA tournament, my alma mater had to beat teams like North Carolina and Virginia during the Atlantic Coast Conference tournament.

NC State beat heavily-favored Houston in the NCAA championship, when Lorenzo Charles put back an air ball shot by Dereck Whittenburg to win in dramatic fashion at the buzzer. One of the first things that Valvano did at the beginning of the 1982-83 season was to tell his players that he had a vision that he was going to win a national championship and that this was the team to accomplish the goal.

He believed this so much that he devoted an entire practice to cutting down the nets, which is the tradition for the winning team. Each player gets to snip a piece of the net and the coach gets to make the final cut. Valvano had his players get out a step ladder, grab scissors and take turns cutting a piece of the net. He didn’t just do this once. N.C. State did this regularly.

The first time it probably felt odd to the players. The more they did it, the more they got what Valvano was doing. Before you can celebrate the victory and cut the net down, you have to believe it will happen. Valvano planted championship seeds in his players. Valvano believed it and he needed his players to believe too. The Wolfpack did this even though they played in a league that had Michael Jordan at North Carolina and national player of the year Ralph Sampson at Virginia. N.C. State wasn’t even figured to be a contender for the ACC title, let alone the NCAA title. After a rough regular season, the Wolfpack won the ACC and went on a magical run in the NCAA tournament as a No. 6 seed. It was one of the greatest college upsets ever.

What once was just a dream for Valvano became reality. It happened because he started with a simple vision of cutting down the nets.

People have a hard time seeing themselves as winners. They don’t see how they can make this business work. They see me winning and are OK with it, but they have so many little voices in their head that they doubt their own talents and skills. This is a tragedy that I’m working hard to change. I believe that every person has greatness inside them. My job is to help them bring it to the surface and to reap the benefits of that greatness.

I heard things like, “You won’t be able to make it!” What people really meant to say was, “I can’t do it, so I don’t want you to do it!” I learned not to take it personal. You can’t. It’s not YOU that is the problem. It’s about THEIR outlook, their perceptions and their lack of confidence, NOT YOUR’S. Knowing this gives you peace of mind and I’m compassionate toward people with this mindset because I know there is so much more they can accomplish if they would just believe.

The ability to change is magical. It’s like a special power that only special people are able to use. It’s not a special power, but it is because so few embrace the act of change! People hate, hate, hate change. They absolutely hate it! It makes them freak out. Here’s the key: WITHOUT CHANGE, THERE IS NO PROGRESS … EVER!!!

We all know a guy or gal that likes to talk about the “glory days.” They were the star of the high school football team or basketball team that won the championship 10, 20 or 30 years ago. They were on top of the world … in their minds. The problem with these people is that life peaked then and they’ve never been able to recapture that success since high school. They still wear their old letter jacket, go to the high school games and don’t focus on winning in the present or future. The day your past is more exciting than the possibilities of your future, you are now dying.

People like to rest on their past achievement. The problem is that success is never obtained. It’s not a trophy, a medal or a plaque on the wall. No, success is merely rented. The problem for most people is that the rent to have success is due daily. You can’t pay rent if you aren’t working for it all the time. It’s not a race. It’s a marathon that never ends … if you want to be among the best at what you do.

Why can’t people change when the world changes constantly, with or without us? The world is not going to stop changing and you shouldn’t either.

Change is an amazing talent. For years, The Alliance has changed. We keep working to make changes that make us better. Here comes the fun part. People actually “but” me on this subject. “But Andy, you are successful,” the naysayers squawk. “Why would you go and mess up a good thing?” How about this: I can be more successful if I am just willing to change and make changes that are needed!!!

I change because my heart knows it is the right thing to do. If you want to stay the same, then you will never see different results. You are exactly where you are going to be. I choose to take action before it is urgent and required.

The next time you are outside, stop and look around.

Stoplights turn green and people hit the gas. They are moving and changing their surroundings just by pushing a gas pedal.

When you leave your house in the morning the sun could be shining bright. In rolls clouds and a rainstorm changes your environment.

Plant some flowers, water them correctly and what happens? Flowers bloom.

Life is all about change. It’s how we know that we are alive. When you stop changing and stop growing, it might as well be over. Keep moving and we know you are alive. Don’t waste today in the past. Life will be boring if you do that. Challenge yourself. Challenge others. Don’t waste the life you have. Make the most of the opportunity you have to do great things.