UPDATE: My cousin and retired Nevada Wolfpack women’s basketball coach Jane Albright had the chance to visit with us at The Alliance’s headquarters in Burlington, N.C. in November to see what has changed since her last visit. She was at my house in 2017, but had not been to our office in several years. I’ve updated a blog I wrote in 2017, so I hope that it helps you as you read through my updates. The original blog is below as you will see. Thanks for reading!

She spoke to our staff during a lunch and got caught up on all the changes we have made at his company since she was here in 2012. She says that The Alliance has continued to find ways to bring value to people not only at the company; but in the community, North Carolina State University and beyond.

When it comes to leadership, college coaches like Jane Albright are among some of the best at motivating and inspiring people. Coaches know how important it is to build a talented team around you. They know it takes teamwork to be successful too. Cousin Jane has learned from coaches like Pat Summit and John Wooden. I don’t know if it gets much better than that! 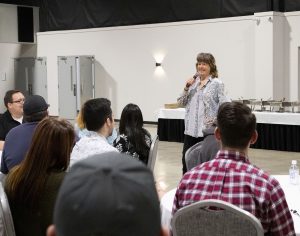 What does it take to be a good leader?

You can study it all you want, but leadership comes from being a good person, telling the truth and taking care of those around you. A great leader serves the people around them instead of expecting others to serve them. We all have different gifts, so a leader is one who knows how to help people find the best area for them to focus on. A leader recognizes they don’t know everything, but they are smart enough to find people who fit the need that needs to be filled in a specific area. Coach Jane Albright lives that very example.

Cousin Jane loves to talk to people about Wooden’s Leadership Pyramid. There are 15 building blocks in the legendary UCLA coach’s pyramid. You can find the pyramid at www.CoachWooden.com if you want to look at it. I love hearing her tell stories about meeting with Wooden, and sharing what she learned from her time with him before he passed away.

She asked our staff what each thought he/she could be the best in the world at. After a minute, she asked for responses and nobody was willing to share. She finally told us that the one thing we could do better than anybody in the world was to be the best version of you possible. She’s right. Nobody else can do you better than you do. There’s only one person like you and there won’t be another one. I encourage you to remember that and to be the best you possible each day.

An easy way to define leadership is the ability to motivate a group of people to act toward a common goal. Leaders have an ability to take a group and its collective skills, set a goal and move closer toward the goal until it is accomplished. They attract people to follow them and the direction they desire.

Cousin Jane is a great leader. I don’t say that because she is my cousin. You don’t coach as long as she did at a high level if you are not talented. I’m proud of her, and I love getting her around my staff because it helps them grow as leaders and thinkers. She makes people better in all areas of her life. She’s molded and developed her athletes into better players, but, more importantly, even better people. Her impact is far reaching. That’s not bad for a young woman from Alamance County. I hope that you will take some time today to think about how you can be the best version of yourself. Keep finding ways to grow and improve. It’s not always easy, but it is necessary.

2017: Saying ‘Well done!’ to Cousin Jane as she retires from Nevada Wolf Pack

From time to time, I’ve talked about my cousin Jane Albright, who has been a women’s basketball coach for the last 40 years.

Today, she announced that she is retiring from her post as the head women’s basketball coach of the Nevada Wolf Pack. I’m proud of all she has done in her career and I want to tell her “job well done!” To do anything successfully for that long is impressive.

Cousin Jane’s roots in Alamance County run deep, and she honed her skills as a player in Graham, N.C. She grew up in the same era with Gibsonville sisters Debbie (N.C. State athletics director) and Kay Yow (legendary N.C. State women’s basketball coach). She played collegiately at Appalachian State University. She spent time coaching under the late Pat Summitt at Tennessee, who won 1,098 NCAA games and eight NCAA titles.

Cousin Jane started coaching in 1977 at Spartanburg (S.C.) High and moved up to college stops at Tennessee, Cincinnati, Northern Illinois, Wisconsin and Wichita State. Her final coaching post was Nevada, where she plans to retire and continue watching her Wolf Pack as a season-ticket holder.

A few years ago, Cousin Jane visited The Alliance headquarters and spoke about leadership to the corporate staff. She talked about learning from John Wooden, the legendary Bruins coach who won 10 NCAA men’s titles in a 12-year span. She loved to talk about Wooden’s “Pyramid of Success.” 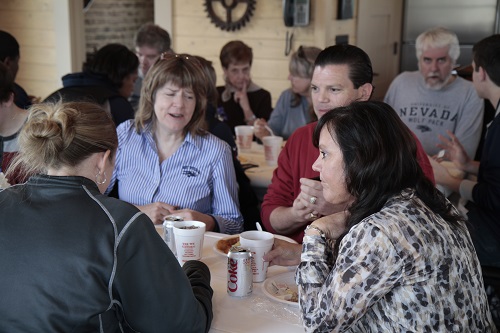 When she brought her Nevada women’s team to play Wake Forest in Winston-Salem in 2013, my wife, Jane and I had the chance to have her players and staff visit us at our home in Union Ridge, N.C. It was my way of thanking her for investing her time in our staff and I wanted to talk to her team about reaching for their goals as they transition from basketball to a career off the court.

Cousin Jane spent her life focused on faith, family and basketball. Those things were very important to her and she used her faith to help her become a successful coach. For 33 years, she was a Division I head coach, won 512 games and reached nine NCAA Tournaments.

I love that she encouraged people to keep trying and never give up. It’s OK to make a mistake, but you have to learn from those missteps. How you react to adversity is what determines how successful you will be.

She might be done officially coaching, but she will continue to make an impact on people and even future Nevada women’s basketball players as she enjoys her retirement in Reno, Nevada.