UPDATE: Labor Day 2020 was a blast! I hope you enjoyed spending time with friends and family. I personally was able to spend time with some of my team out at the Albright Leadership Cabin. We were playing hard, but we were working on the future too. When I’m able to spend time with our team at the cabin, it is one of the best environments to come up with great ideas because it is so relaxing out there.

2020 has prevented so many challenges for people, especially entrepreneurs trying to scratch out a living. What used to be normal just isn’t right now. I hope that changes very, very soon. I did think a lot about the people trying to get through this pandemic as best they can. I am hopeful they will survive this and then thrive financially on the other side.

I got back to North Carolina on Sunday afternoon, and I am making the most of my time in the place where I grew up and built The Alliance. I’m in town for a few days, then I’m headed back to Treasure Island, Fla. where Jane and I live now. It’s fun to see my staff and people around town, so I’m thankful to be here this week. Labor Day gave me a chance to catch up with some folks I needed to meet in person with, and there’s better spot to do that than at the cabin.

I hope that you enjoyed the long weekend. I did my best to relax and enjoy the holiday, but I also made sure to do a little bit of work too!

A lot of people ask me what I do in my free time. Some don’t think I ever stop working, but that’s not true. The latest example I can give you is Labor Day Weekend.

First off, I hope you enjoyed a great Labor Day Weekend with friends and family. I know that I was able to recharge my batteries and get geared up for the last four months of 2019!

On Thursday night, I got back home from traveling for meetings around 9 p.m. and spent time Friday planning and talking with some people on the phone at my house. On Saturday, I went to NC State to watch the Wolfpack play football with about 25 of my family and friends. I got to hang out with a great group of people at the Albright Leadership Cabin on Sunday evening, and we got up bright and early Monday for the first day of Dove season in North Carolina. We also shot skeet and got in some quality fishing on Labor Day.

Now, I might have been able to sneak in a few phone calls, conversations, texts and emails, but for the most part I was playing with a good group of friends and family all weekend.

I worked hard leading up to the holiday, but I played hard once Friday came around. I was able to do so many things I love doing because I put in the work needed to allow me to do those things before the holiday rolled around. 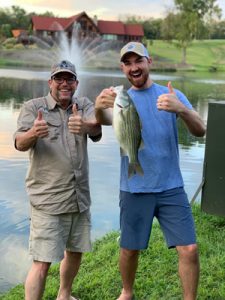 That’s what you have to do if you want to be successful. You have to be willing to make sacrifices that most won’t, so that you can do what most can’t later. You have to trick yourself to do this consistently. It’s a mindset.

I hope you enjoyed the weekend. Now, I hope you are focused on what you need to do this week.

I did a little research on Labor Day and how it all came about. I found out some pretty interesting facts about this holiday.

Oregon first adopted it as a holiday in 1887. A few years later, 30 states officially recognized it as a holiday. Congress voted to approve Labor Day a national holiday with President Grover Cleveland signing it into law on June 28, 1894. He chose first Monday in September.

Interestingly, Canada beat us to designating Labor Day as a legal holiday in 1874. Originally, Canada began the holiday as a significant demonstration demanding rights for workers. Canada and the U.S. adopted the holiday because workers were being worked 12 hours a day, seven days a week. Some children started working as early as age 5.

The holiday really was about the labor situation in America those first few years. There were all kinds of strikes and unrest in those Industrial Revolution days. On Sept. 3, 1916, the Adamson Act was passed to define the eight-hour workday. This was the first federal law regulating hours of workers in private companies.

Historians say the expression “no white after Labor Day” comes from when the upper class folks would return from their summer vacations and stow away their lightweight, white summer clothes as they returned back to school and work.

Most people see it as a big retail shopping day and weekend, a symbolic end to summer and the signal of football season too. Cookouts, concerts, parties and anything you can think of that people find entertaining mark this special weekend and holiday annually.

Many school children dread this holiday as it means school is back in session, but parents enjoy the much-needed break from summer vacation.

According to the U.S. Department of Labor site, the first state bill was introduced by New York, but Oregon was the first to pass a bill in 1887. During 1887, four more states – Colorado, Massachusetts, New Jersey, and New York – created the Labor Day holiday by legislative enactment. By the end of the decade Connecticut, Nebraska, and Pennsylvania had followed suit.

Labor Day is the third most popular day for barbecuing, after the Fourth of July and Memorial Day. The first Waffle House opened on Labor Day in 1955 in Georgia.

More than a century after the first Labor Day observance, there is still some doubt as to who first proposed the holiday for workers. There are records that show Peter J. McGuire, general secretary of the Brotherhood of Carpenters and Joiners and a co-founder of the American Federation of Labor, was first in suggesting a day to honor those “who from rude nature have delved and carved all the grandeur we behold.”

Others don’t think it was McGuire. Many believe that Matthew Maguire, a machinist, not Peter McGuire, founded the holiday. There is evidence to support this thinking. Maguire, later the secretary of Local 344 of the International Association of Machinists in Paterson, N.J., proposed the holiday in 1882 while serving as secretary of the Central Labor Union in New York. What is pretty clear is that the Central Labor Union adopted a Labor Day proposal and appointed a committee to plan a “demonstration and picnic.”

Most cities used the day to hold street parades to show the public, “the strength and esprit de corps of the trade and labor organizations,” and then followed with a festival filled with recreation and entertainment for workers and their families. Speeches from well-to-do people were added in later years to promote the significance of the holiday.

Labor Day is a true celebration of the American worker and the American dream. In July of this year, more than 160 million people comprised the civilian labor force in the U.S.

I’d say knowing that many people are out there working hard to make this country the best in the world is more than enough reason to take one day each year to celebrate their efforts. I know that I had a blast doing some of the things I love to do all weekend. I hope that you were able to do the same. It gave me a chance to get dialed back in, and I’m more focused than ever before on what I want to achieve for the rest of 2019. Hope to see you soon. Keep pushing to make your dreams and goals a reality. I believe in you, and I encourage you to do a little bit more every single day!