There’s a word that most people don’t like hearing, when they really should embrace it immediately.

You have heard the “No” word numerous times in your life. Think about the many different ways you’ve heard it delivered in conversation, via text or in an email.

“Not at this moment.”

When you were a child and did something wrong, what did you hear from one of your parents?

You probably heard “no!”

Now, most people think the word “no” means no. A lot of people think that the word no means to stop, so guess what people do when they are told no? They stop pushing questions toward a person because they just heard the word no.

When I hear the word “no” it is like pure gold to my ears. People who are great at building teams, selling and networking with people love to hear the word no right off the bat. It’s like the game doesn’t really start until they get a no from a person.

The word “no” gives people a sense of security and safety. It gets people thinking that THEY are in control, and they are controlling the direction of the discussion.

I get more excited about hearing the word “no” then I do when a person says “maybe” or even “yes!”

When I hear “no,” I know that it could mean a multitude of things.

“I need some more information.”

“I don’t know what you are talking about.”

It can mean a whole lot of different things. My simple job is to find out exactly why the response to what I was saying was “no.”

If I can get a person to say “no” repeatedly, I get more excited because it gives me the opportunity to control the conversation and take it in whatever direction I want to it to go.

If you can get really good at hearing the word “no” earlier and more often, you will be more successful. Doing that allows you to take control quickly. Once you get the “no,” you decide what happens next.

If you keep hearing “yes” from people then you are not asking the right questions. People think that because they hear the word “yes,” they are on the right track. That is incorrect.

When I am negotiating, I say “yes” right off the bat. I do this because the person thinks he/she is doing everything right, and they will tell me all the little secrets I want to know. The other person doesn’t even know that I’m just going to say “no” in the end, or that I know exactly what they have to offer. Knowing this is huge!

Why do I do this?

There are three ways to use the word “yes.”

The three ways are counterfeit, confirmation and commitment. Each “yes” is very different and it is important to understand them all.

The counterfeit yes is the escape route. It is the most commonly used yes when someone wants to get out of doing something or talking about a topic they don’t want to talk about. They are saying yes, but they are not going to take action. They haven’t even prepared to do what they’ve just agreed to do.

A great example of this is when you ask a person if they are planning to attend an event like our National Convention. I can’t tell you how many times I have asked a person if they are going and they say, “yes!” Guess what I ask them next? Did you get your ticket yet? Did you book a hotel room? Do you have your plane ticket?

See, I could assume they have their ticket and let things end there, but I know I need more information in order to be certain that the person really plans to come. Instead of walking away thinking they are going to an event, I dig deeper and find out how serious they are about coming. I’ve been to enough events that I know buying your ticket doesn’t ensure that you are actually coming. Now, when you have a plane ticket, a hotel ticket and an event ticket it’s very likely that you are coming.

I also ask questions like, “whose taking care of your children while you come to our event?”

Their answer is going to dictate whether I KNOW they will be attending our National Convention or they won’t and just told me “yes” to end the conversation.

When you get this confirmation yes, you can ask things like, “are you excited to go?” With this type of yes, you want to be confirming with them consistently, letting them know what they are signed up for and to not miss out.

The commitment yes is the one we all want to hear from a person. This is the ideal commitment you want out of somebody. What you want to hear is, “Yes, I’m going. I can’t wait! We bought our tickets the first day they went on sale. See you there!”

This is my favorite yes, because I know that I’ll see them at whatever event we just talked about! People need to learn these three different types of “yes” so you can quickly get to the word “NO!”

The word “no” means you are in control.

If you are receiving the word no over and over in a conversation, that means you are in control of the conversation. You can take the discussion wherever you want it to go, and “DO THE DO!” 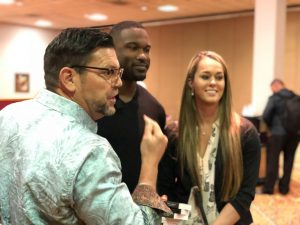 There is some serious psychology involved if you think about it. When you are having a conversation with a client in a home, you should be looking to hear the word “no” immediately from the family.

Why do you want to hear no so quickly?

Here’s what I will tell you about the “no” word:

“No” is my superhero.

“No” is my champion!

If I’m talking to an individual and they keep saying “yes,” that might as well be a stop sign! No means GO! Once you get that “no,” then you have permission to attack!

This is what makes me different than everyone else, and successful people in business feel the same way!

We love the word “no!” We try to collect as many of them as we can. People who avoid this word need to change that now.

Remember this about sales: “NO” DOESN’T ALWAYS MEAN NO!